This is the guide for anyone who wants to choose a programming language for their career path in 2019. Before we move any further, keep in mind that this is the practical and objective review of the present state of IT industry. The entire list of programming languages in this post is based on four criteria and is a result of a period of one-week in-depth research. These four criteria are:

The ultimate goal of this definitive guide is to help people with an informed decision as to which language the IT world is looking for in 2019. This post also helps you in deciding which language is worth to master and which language will help accelerate a successful career as a software developer.

Typically developers look for these traits before jumping into mastering any programming language:

According to StackOverflow’s annual survey of 2018 69.8% of the developers claimed to use it. This is considered to be the most popular programming language. This dominant programming language has seen an immense growth over the past decade due to the fact that many web-enabled devices use JavaScript. JavaScript is highly efficient that many of the front end frameworks such as Angular, React, Backbone, and others base on this language. In order to create interactive web components with great efficiency then JavaScript is a good idea for you. If you pursue your career in JavaScript then keep in mind, you should also be familiar and comfortable working with HTML and CSS, which is what web pages are made of. If you wish to use JavaScript for mobile applications then tools like Apache Cordova or React Native are also available.

It is safe to say that JavaScript will be there for a very long time in the future. JavaScript is the most popular programming language above Java, Python, Ruby and more. Browsers use JavaScript because it is easy to get started with and easy to understand. JavaScript is easy to use with manipulative GUI and you can build an interactive project that way. 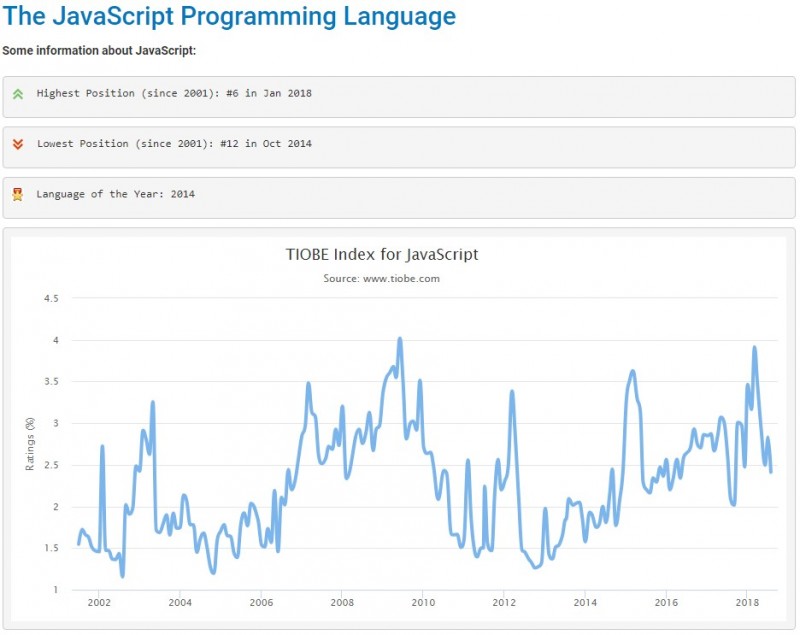 JavaScript Developers salary in the US according to Indeed.com

JavaScript tendency in popularity from the last 5 years according to Google trend is steadily increasing.

JavaScript is without a doubt one of the most popular languages in 2019 and tend to be popular in the next decade as well. According to the above statistics, it is hard for any language to stand high at such level and maintain the caliber throughout.

Swift released back in 2014 by Apple and is a relatively new programming language. You can develop native iOS or macOS applications in this language. As compared to Objective-C, Swift is an improvement in terms of performance and usability. Swift stands at number six in the list of most loved languages for 2019. If you want to take chance with the career in Swift, the fact is that you will definitely enjoy it. Swift is a high-paid career path for those who want to pursue their career in mobile applications development. Generally, iOS apps proved to be profitable as compared to Android apps on the market. 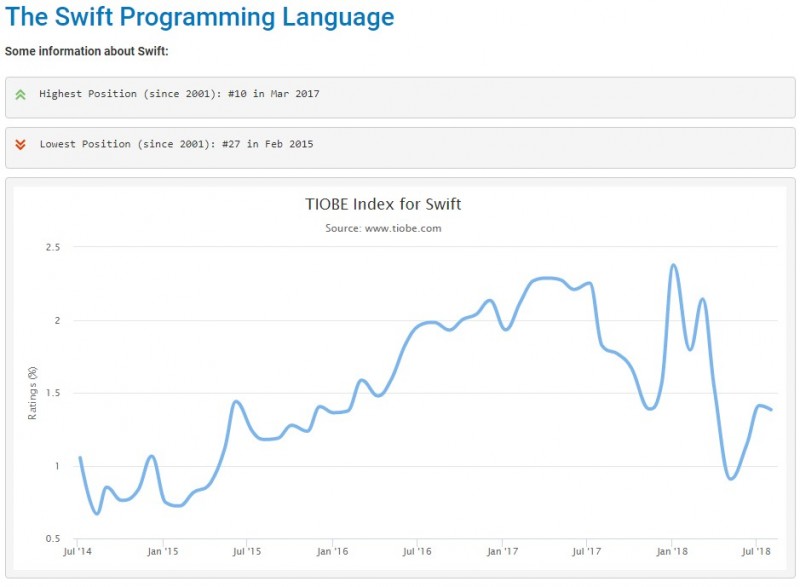 Swift Developer salary in the US according to Indeed.com

Swift tendency in popularity from the last 5 years according to Google trend is showing a steep trend.

Swift is new and better language for iOS and macOS apps as compared to Objective-C. Swift has gained popularity in few years and already become dominant over Objective-C.

Python is considered to be the best and general purpose programming language which is nowadays available everywhere. This is being used in web applications, desktop applications, network servers, ML (machine learning), statistic tools etc. This language is even used in giants like NASA and Google. The reason for the popularity of Python is that it is neat, readable, and very well structured.

There are few frameworks such as Django and Flask and gaining popularity as the time passes. Python is also heavily equipped to entertain machine learning and data analysis libraries such as Scikit-Learn and Pandas. Python is here to stay for multiple purposes and is a good career path for beginners due to its high-level and easy to read and write. 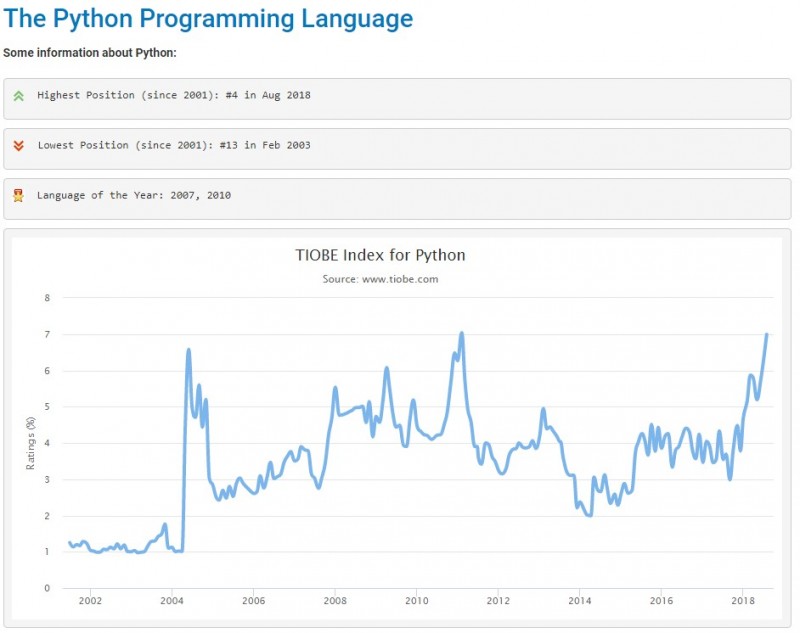 Python Developer salary in the US according to Indeed.com

Python tendency in popularity from the last 5 years according to Google trend is impressive and increasing.

If you become an expert, then you are undoubtedly having a great career in the very near future. This language is practically the top in every department.

Java is without an iota of doubt the most popular programming language in the world. 90% of Fortune 500 companies heavily rely on this language. The famous slogan “write once, run anywhere” is still very much alive. Also, the most valuable thing is that it has a Java Virtual Machine (JVM), which makes it compatible with any platform.

One can choose for a backend developer, big data developer, or Android developer for a career path in Java. Though Java is not much popular these days, the heavy use of this language still guarantees that it won’t go anywhere in the next decade. You can still find plenty of Java job positions at your place or remotely around the world. 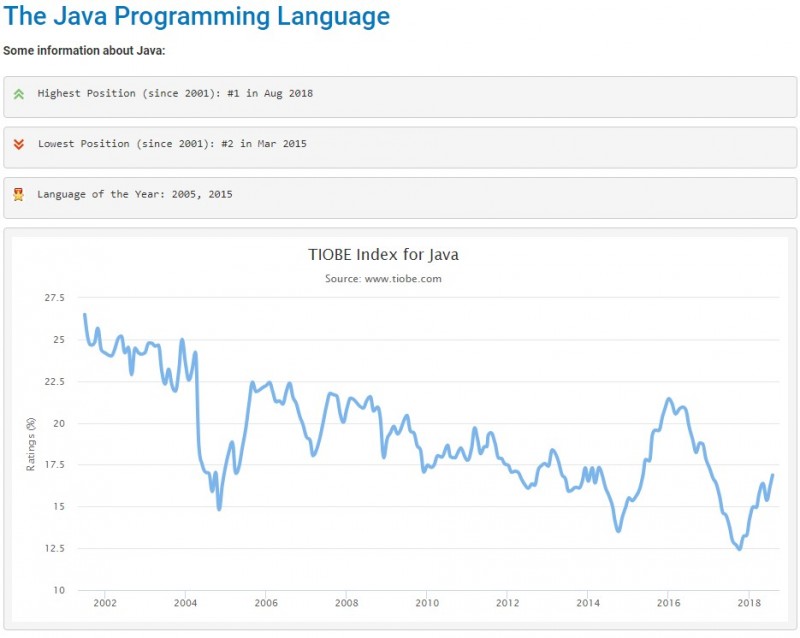 Java Developer salary in the US according to Indeed.com

Java tendency in popularity from the last 5 years according to Google trend is decreased.

Java is one of the most popular languages without a doubt. However, the research shows that Java is slightly above the salary range, though it covers broad range of experience and job positions as well.

C++ is a highly efficient programming language created back in 1985. Much of the large systems were created in C++ and remained highly efficient over the time, including Microsoft, Oracle, Paypal, and Adobe. C++ has remained in high demand in the past due to its performance, variety of context, and reliability.

A career in C++ language is typically involved in developing desktop applications, especially where performance tasks are intensive. 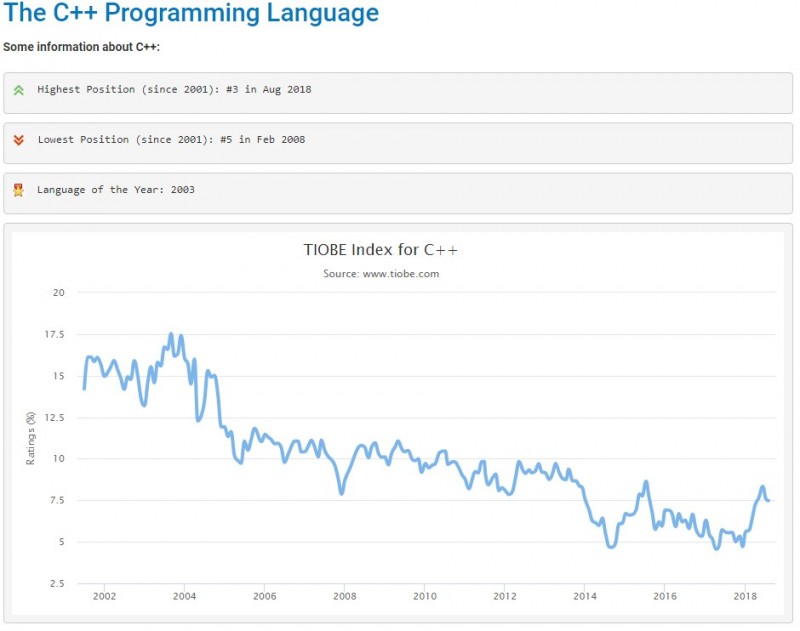 C++ Developer salary in the US according to Indeed.com 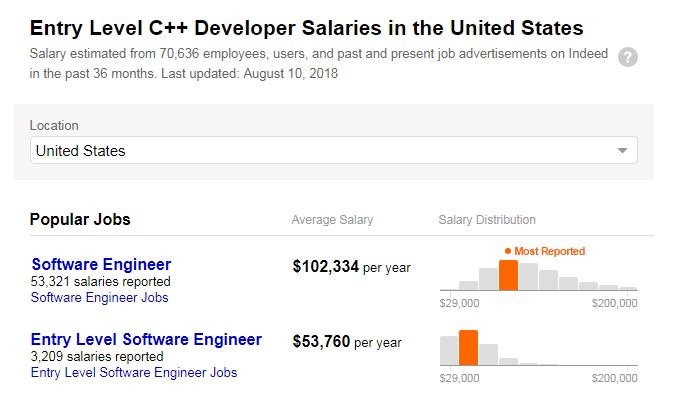 C++ tendency in popularity from the last 5 years according to Google trend is cyclic.

C++ is a popular language of all time and it is a luxury if you master it and open a path for various position in the industry. C++ salaries are usually floats near or above average.

Ruby is "a programmer’s best friend". It is one of the most loved programming languages and is designed to be user-friendly and easy to use for the developers. The focus of Ruby is to code less and achieve more. You can get more output with few lines of code written in it. If you look over the code written by an expert, or well-written code, you will see them similar to sentences written in simple English. It is great for a beginner, as they pick this language much faster and enjoy it all the way up.

The most popular framework of Ruby is ‘Ruby on Rails’, which is the reason for its popularity. All the ideas for a powerful tool for a web are encapsulated in ROR. A career in Ruby is a great choice as the framework is ‘optimized for programmer happiness’ and is also well paid. The only drawback is that Ruby is not much popular as compared to fellow languages and you can also find few jobs in some locations. 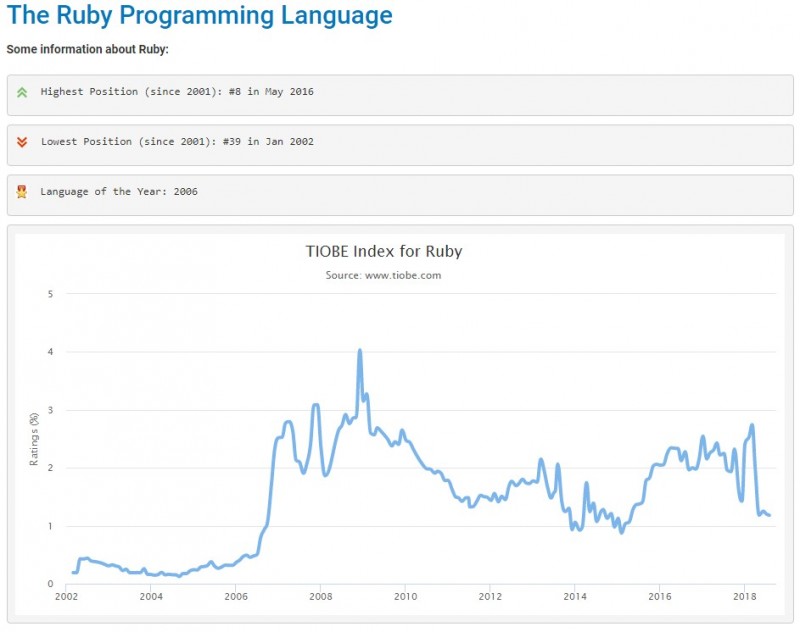 ROR Developer salary in the US according to Indeed.com

Ruby tendency in popularity from the last 5 years according to Google trend is showing a decrease in usage.

To choose a career path in Ruby is always great. Salaries are well paid and language is quite fun to write. Only drawback we see here is that Ruby is not as popular such as its competitors. Positions are limited but highly paid.

Rust is voted as most liked by developers for a third consecutive year in StackOverflow survey of 2018. Rust is a sponsored program of Mozilla. This language first appeared in 2010 and soon takes the edge over other languages. Rust gained popularity remarkably and is improving even more as the time passes.

Beginners may find it hard to pick it up, but with effort and hard work, it is totally worth it. Rust is considered well paid as seen in StackOverflow’s survey of 2018 globally and the US.

Rust tendency in popularity from the last 5 years according to Google trend is increasing.

Elixir is a dynamic, functional language designed for building scalable and maintainable applications. Like other popular programming languages, Elixir appeared in 2011 and immediately gains popularity. It was inspired by Erlang, and old language developed in the 1980’s by Ericsson. The biggest drawback of Erlangs is the quirky syntax and usability, but according to the author of the language, there is still room for improvements.

Elixir is used for web development, and like Ruby career paths are well paid but limited. The positive thing is that you can still learn the language due to the gaining popularity of Elixir year by year. Elixir stands at number one in the US for top paying technologies in StackOverflow 2018 survey report.

Elixir tendency in popularity from the last 5 years according to Google is on the rise.

It stands for Scalable Language and is rewritten java language by improving its drawbacks. Scala code is compiled to run on Java Virtual Machine (JVM). The popularity of Scala is obvious that companies like Twitter and LinkedIn use it.

Scala may be difficult for a beginner, but those make it past the learning curve can most probably enjoy a great career ahead due to the fact that more and more jobs are coming into the market for Scala developers. Scala ranks high in salary surveys, making the top ten globally and sharing the second place in the US according to StackOverflow 2018 survey report.

Scala tendency in popularity from the last 5 years according to Google is rising.

If you are interested in statistics, graphic representation and data analysis, then R is the programming language for you. Currently, the number one choice of data scientist is R. If you are really interested in the data science field then R is a stable and profitable career path to chose.

R Programmer salaries for different roles in US according to Indeed.com 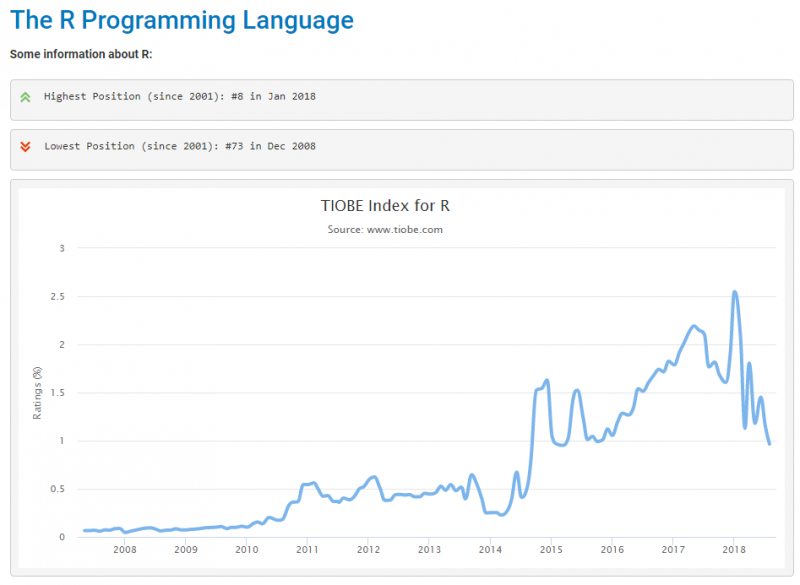 R Programmer salaries for different roles in US according to Indeed.com 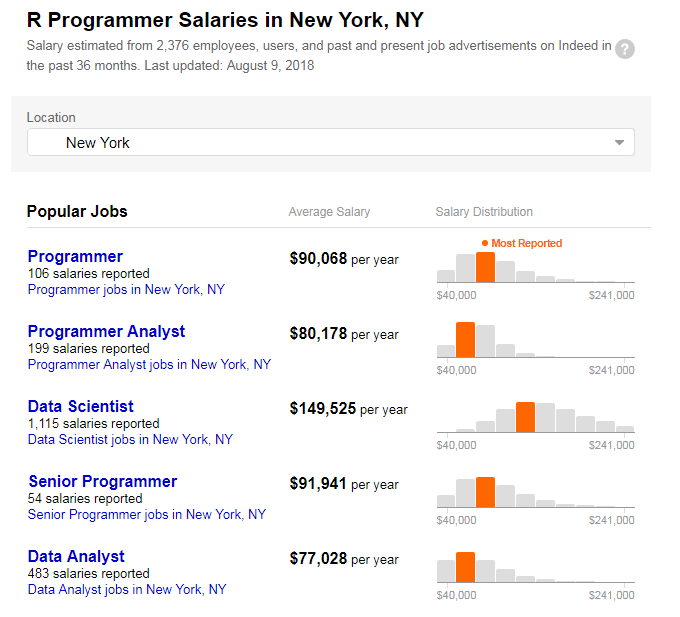 R developer tendency in popularity from the last 5 years according to Google is steadily rising.

R programmers, specifically for the data science field are in demands. There are limited opportunities but salaries are highly paid. The trend is changing and R programming is a good career choice for those who are looking to pursue a career in data science, statistics, etc.

This concludes our post and we hope that you get a pretty good idea from the list of top ten programming languages that you should consider learning this year. Keep visiting and share with your friends.

Chethana
Is vba have future??
Reply

Aleksandra Bessalitskykh
Thanks for sharing!

As you can see, the adoption of Elixir continues to grow but it is too early to qualify it as one of the most popular programming languages.

But Phoenix web framework is its big advantage. The Elixir programming toolset is also good. Although, the number of libraries and services is often not enough for all developers’ needs, and the core team and numerous contributors are actively working to improve the situation.

I suggest you should take a look at this article to find out more details on Elixir programming mlsdev.com/blog/elixir-programming-facts-to-know-for-better-app-development

Joseph
Aleksandra, it seems that your website is down.
Reply

No, It works. Everything is ok.
Reply

Dmitriy
I also tried to check article yesterday and your website was down for me as well. Probably some temporary downtime. Will read your article tomorrow.
Reply